Be sure to follow the blog to get emails each time I do an update! Just look in the lower right corner of the screen and select “follow.” Thank you!

–A nice stretch of summer weather ahead for us

No significant threats in sight.

For an explanation about some of the clouds seen yesterday, be sure and check out the “News” section below!

As for our forecast, well, these morning clouds will likely be slow to move out today, leaving us with partly to mostly cloudy skies. We have now entered a pattern that favors very warm afternoons and partly cloudy skies. Rain chances look dismal until maybe Sunday.

By the end of the weekend, the pattern will become more unsettled. Sunday will offer a storm or two for the plateau, but the beginning of the work-week may offer better rain and storm chances. I half expect rain chances to increase as we near that time period.

All is quiet, though some models still hint at some Gulf development within the next seven days.

In only 10 minutes, an average hurricane releases the energy equivalent to all the world’s nuclear weapons combined.

Chicago’s worst flash flood event occurred on this day in 1987. Slow-moving thunderstorms dropped 9.35 inches of rain on the city in only 18 hours. Flooding caused over 220 million in damages. Numerous water rescues took place.

The high was 82 degrees, after a morning low of only 60. No rain fell.

Some of you posted some really cool cloud pics to my Facebook page yesterday. Thank you for those! Some of you were quite frightened by them, but this is one case when the weather’s bark was worse than the bite. The most common images came when the leading edge of some strong storms was approaching the plateau. 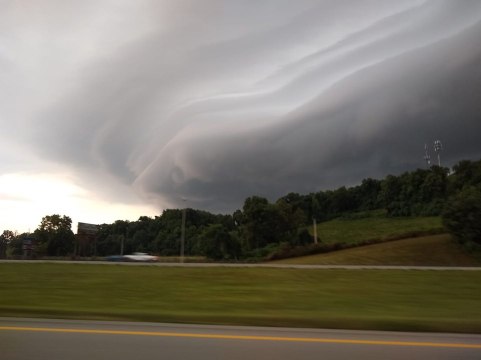 These are called Shelf clouds and often precede gusty winds. Sometimes, those gusty winds can be damaging, but they are straight-line winds and are not associated with tornadoes. These Shelf clouds form when a line of storms is approaching. The rain-cooled air behind these storms moves along the landscape, forcing the warm and humid air ahead of the line to rise upward rather rapidly. Warm air is easily lifted and heavier, rain-cooled air is the perfect mechanism to kick that warm air up into the sky (like a cold front). The result, as you can see, can be very dramatic.

Pictured below is a diagram of that process. This example storm would be moving from left to right on your screen. Notice the warm air ahead of the line is forced upward, as the colder and rain-cooled air of the storms forces it to do so. Because the rain-cooled air forces the line to bulge outward, it causes the sides of the storm to develop a curved, swirl-like appearance.

And then there was the classic “this is a tornado” pic that always comes in with summer storms. I was sent this as a pic from yesterday’s storms, but it looks an awful lot like the cloud people mistook for a tornado in a storm earlier this summer near Tansi. Never the less, this is a Scud cloud. This clouds are similar to the ones in the picture above, except it’s a smaller area experiencing the rising and condensing air. Again, this is air rising into the storm that has condensed to that you can see it. If it’s not rotating, it’s not a tornado.

All storms have air rising into them. Most of the time you can’t see it, but sometimes Ma Nature treats us to a display of condensed rising air. What a show that can be!

I hope that helps explain what you saw! Again, thanks for all the pics.