–Hot weather continues for us

Just be careful in the heat of the afternoons this week.

Short-term models insist on some isolated t-storm activity developing around 4:00 p.m. this afternoon. Fingers crossed you end up under one of these! It’s starting to get very dry out there.

Only slight, mainly heat-of-the-day afternoon and evening storms will be with us this week.

A weak frontal boundary drops in on Saturday, increasing rain coverage a bit more. I’m still not overly impressed with that rain setup.

The best chance of rain could come at the tail end of the forecast period. A tropical system may develop in the northern Gulf and move northward. This would certainly bring us some better rain chances. I’ll keep an eye on it! 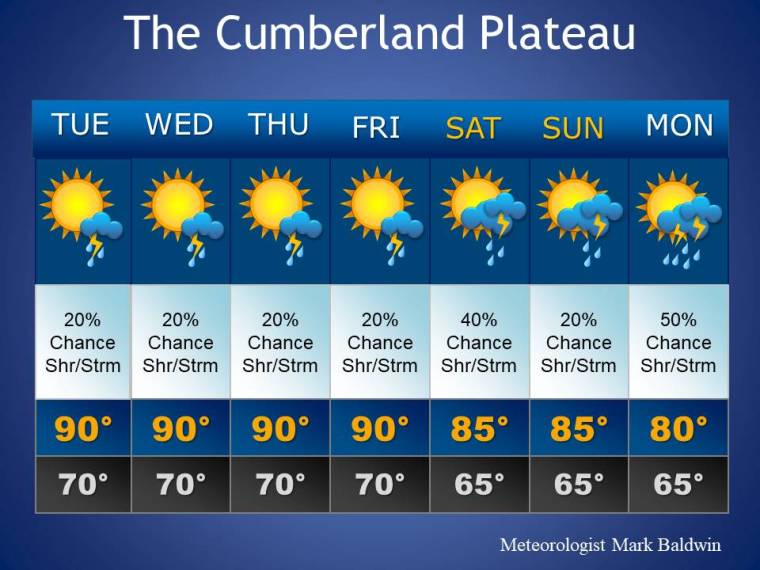 This is a bad anniversary date for the Florida Keys. Two years have been especially destructive for the islands on this day.

In 1919, a hurricane struck the island chain and drowned more than 500 people. This was before the naming of hurricanes began, so we don’t have a name to associate with the hurricane.

On this day in 1960, Hurricane Donna struck the Keys with wind gusts to 180 mph. This was also accompanied by a 13-foot storm surge.

The map below shows the path Donna took.

The tropics are quiet for now, but that could change in the coming days. That system moving toward Florida is what may swing up our direction next week and bring us some rain. Fingers crossed!

The other two yellow-shaded areas are certainly worth watching. There are lots of indications that if anything develops from these two, it would likely move in the direction of the US. That doesn’t mean they’ll make landfall, of course, as systems can turn on a dime and miss us at the last minute (ie. Dorian).

By tracking what shoppers buy, Walmart can be ready for when something is about to increase in sales, so they can stock up. For instance, before a hurricane hits, sales of Strawberry Pop-Tarts go up 700% at coastal Walmarts! The tasty, nonperishable nature of Pop-Tarts makes it a staple during hurricanes.

A measure indicating the level of discomfort the average person is thought to experience as a result of the combined effects of temperature and humidity in the air.

Yesterday, NASA released an article showing how they used their data to analyze Hurricane Dorian’s impacts.

“At NASA’s Goddard Space Flight Center in Greenbelt, Maryland, a graphic was produced that shows precipitation that fell during the almost two-week period from August 27 to the early hours of Sept. 9. The near-real-time rain estimates come from the NASA’s IMERG algorithm, which combines observations from a fleet of satellites, in near real time, to provide near-global estimates of precipitation every 30 minutes.” They also looked at tornado data and included that in their analysis.

“By combining NASA precipitation estimates with other data sources, we can gain a greater understanding of major storms that affect our planet.”

Today’s severe weather will be concentrated on the border of Nebraska and South Dakota. Significant wind and hail damage is certainly possible. Isolated tornadoes can’t be ruled out, but severe straight-line winds and huge hail will be the main threats.

Yesterday, the NWS confirmed that a tornado touched down in Oregon with some storms they had Sunday. Tornadoes are rare in Oregon but this one was very weak, damaging a shed at a pumpkin farm.

You can see that shed in the lower left of the picture below, with it’s solar panels damaged. Also, notice the “swirl” pattern to the corn nearby. They usually use that corn field for a maze.