–The main threat facing the entire plateau remains flooding rainfall. Be very careful if you encounter flood waters. Remember, only a few inches of water can land you in some very serious trouble, especially if it’s swiftly moving water.

–In addition to heavy rainfall, strong to severe storms will threaten the plateau tonight. Keep in mind that it will take very little wind to down trees and cause power outages. I think our main timeframe for the threat of severe weather will be 8:00 pm to midnight. While only the southern half of the plateau is in the slight risk, keep in mind that this outlook may change as we go through the day, which could lead to more areas being added to that slight risk.

–Much colder air arrives for Thursday night. Make sure your outdoor pets are dry and warm.

We’ll see scattered showers today, as a warm front lifts north. Those showers will likely become more numerous as we move into the day.

By tonight, a strong cold front will charge into this moist airmass. That will lead to heavy rainfall that could lead to flash flooding. I would plan on trying to be home and off the roads before dark.

The main timeframe for strong to severe storms tonight should be between 8-midnight. Heavy rainfall and very gusty winds are possible. In addition, we can’t rule out an isolated, brief tornado, especially for areas south of I-40. Any gusty winds will be capable of toppling any of these trees in saturated soils. Prepare for power outages, just in case.

Then, we see some morning showers on Thursday. That moves out and leaves us with some drier weather.

The next rain-maker may hold off until Tuesday.

Flood and flash flood watches blanket portions of the eastern US today. They are shown as the counties shaded in dark green. 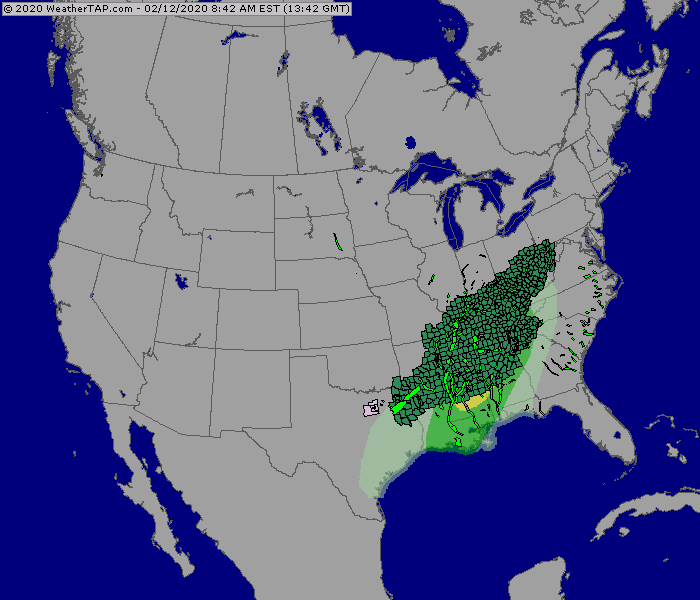 The wintry side of this system will spread across the Midwest and New England. Wind chill advisories and winter storm conditions will be felt across the northern plains.

In 2006 a snow squall moved off Lake Michigan and dropped visibility to zero along Highway 31. The result was a 96-car pileup. While no one was killed, 26 people were injured.

Wednesday Weather Word of the Day

A snow squall is an intense short-lived burst of heavy snowfall that leads to a quick reduction in visibilities and is often accompanied by gusty winds. They may
be characterized by one main squall or multiple squalls.

And yes, I’ll be there if I have to crawl! ha