Easter Sunday: There is an ENHANCED RISK for severe thunderstorms across the plateau for this afternoon and tonight. All modes of severe weather will be possible. Stay weather-aware. There is also a flash flood risk today. Be aware of rapidly rising waters in heavier downpours of rain. Finally, there is a wind advisory for today for winds that could gust to 45 mph.

FLASH FLOOD WATCH: Goes into effect at noon and expires at 7:00 am Monday.

My concern has changed little from the start, but notice I am on the upper end of the medium concern. We’ll see how things change during the day. 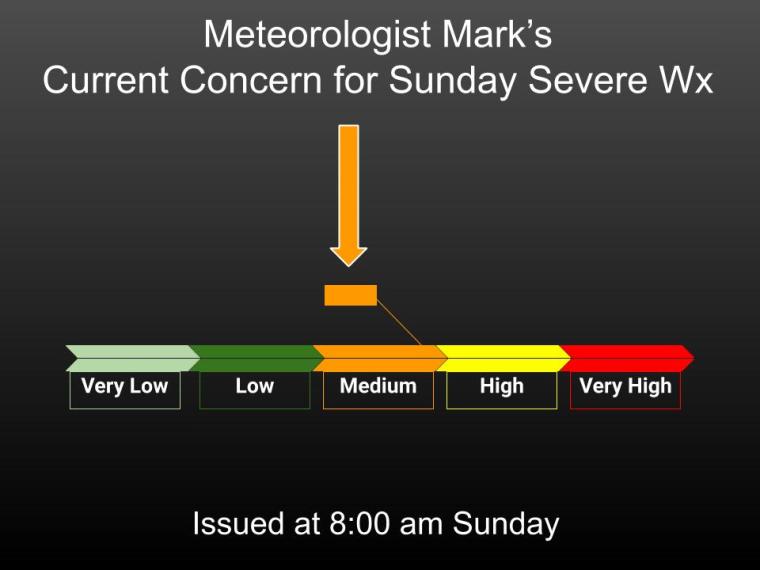 Today’s weather is complicated by several factors. First of all, we are in the process of destabilizing and moistening up our atmosphere. Yesterday, we had a dry air mass in place and a warm front to our south is trying to bring in warm, moist air to replace that. The process of that happening is causing this morning’s rainfall. We may hear some thunder with this activity but severe weather is not expected.

In fact, severe weather is not expected through at least noon.

The big question is whether or not we become unstable enough to support any severe t-storm that may come our way this afternoon. I can’t be more specific on that time just yet.

The potential for tornadoes has increased substantially for much of Middle TN for this afternoon, not including the plateau. The thought is that we will still be too cool and rather stable this afternoon. I will be watching that closely. I would begin being weather-aware after 1:00 this afternoon, just in case one of those storms holds together long enough to make it to the plateau. It is very important that we watch this very closely, as storms will be moving very quickly, at speeds of up to 60 mph.

Later tonight, around midnight, a potent squall line will move across the Midstate. All weather hazards are possible with this line. This is the most likely timeframe for severe weather for the plateau. That timeframe will be 10:00 pm – 2:00 am, as it looks right now.

So, beginning at 1:00 pm today we could be under the threat of severe weather for 12 hours. I’ll update during that timeframe to keep you all posted, so that you don’t stress out for that whole 12 hour time period.

I’ll be posting updates throughout the day, as needed, but not more than three hours apart. So, the next update will be at 11:30 (or sooner if I hear anything you need to know).

Sunday: Look for mostly cloudy and rain, with gusty south-southeast winds through the day. Rain may be heavy at times. Look for storms to increase this evening and overnight. Some of those storms may be severe.

Monday: Look for mostly cloudy skies for much of the day, along with possible sprinkles or light showers, especially in the morning.

Today is the anniversary of the highest wind speed ever clocked in the world, and it happened right here in the United States. On this day in 1934 the winds averaged a whopping 186 mph on top of Mount Washington, Vermont for five minutes! A gust was clocked at 231 mph. Now that’s what I call a stiff breeze. ha

Q: In what month does Tennessee get most of its tornadoes, on average?

NASA’s newest lunar moon rover has a problem it will have to contend with. That problem is moon dust! Astronauts have complained that the dust find its way into everything, even jamming their shoulder joints to their spacesuits. To make matters worse, it’s like little bitty shards of sharp glass. Ouch! The dust even caused hay fever-like symptons in Astronaut Harrison Schmitt.

The new rover, Viper, will have to make sure that dust doesn’t mess up the wheels and cause problems. NASA is hard at work, ensuring that doesn’t happen. Oh, that pain-in-the-neck dust! ha

Those of you who were up with me last night on Facebook saw me share this as it was happening. I’ve never seen the hook echo portion of a rotating severe t-storm pass directly over a radar, but that’s just what this storm did in western Texas last night at about 9:30. Thankfully, the storm was not producing a tornado, even though a tornado warning was issued. The storm produced softball-sized hail!

In the very top image, the storm is approaching the radar. The image on the bottom left is several minutes later and the image on the lower right is the final one I captured. That black circle is the radar. It can’t detect precip when the rain is falling straight down on it. That is also precisely where the tornado would have been.

Recent storms have produced various forms of wind damage across the plateau. Wind damage always leads to claims that it was caused by a tornado, but that is often not the case.

Twisted trees offer few clues. In high winds, trees may want to fall with the wind, while weaknesses in the tree structure encourage it to fall another way. The compromise is often a twisted trunk.

Winds with a tornado increase dramatically with height. This can lead to trees being snapped, rather than uprooted. Straight-line winds most commonly uproot whole sections of wooded areas, with trees laying in the same direction or, in the case of a downbursts, in a diverging pattern away from a point.

People often report hearing a roaring sound and that convinces them that a tornado is occurring. That is very misleading. High winds, whether rotating or straight, will make a roaring sound. In the more violent tornadoes, the wind typically sounds more like thousands of cascading waterfalls, rather than a roar.

The main point I like to reiterate is that wind damage can occur without a tornado. We need to take severe thunderstorm warnings seriously. Whether a 100 mph is coming at you straight or in a spin, you should take cover just the same.