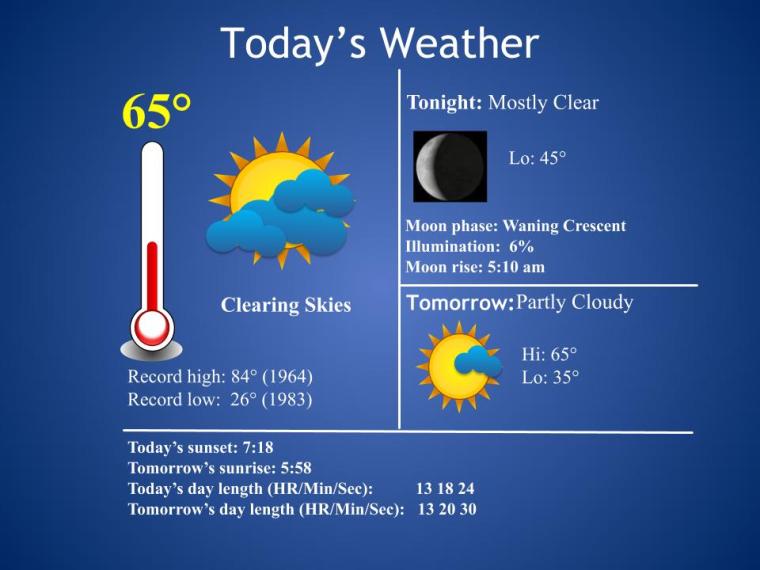 A beautiful start to the week

Unsettled weather returns for the end of the week 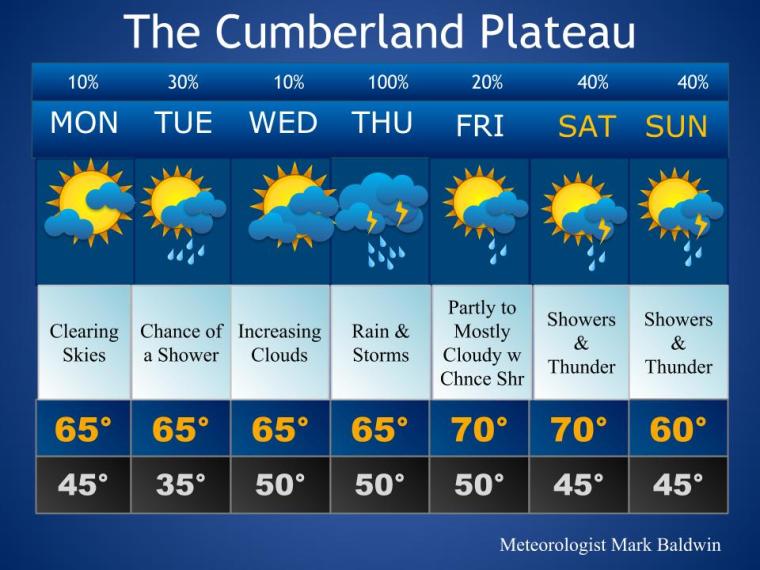 Monday: A beautiful start to the week, after clouds clear out in the morning.

Tuesday: Partly to mostly cloudy with a chance for a shower, especially north of I-40. Frost overnight.

Wednesday: Clouds should start to move back in, but rain holds off until late.

Friday: Partly to mostly cloudy with a chance for showers.

Saturday – Sunday: Partly to mostly cloudy, with chances for showers and thundershowers.

Strong to severe storms are expected along the Southeast Coast and Florida today. All modes of severe weather are possible. Elsewhere across the country, only light areas of precipitation are expected today and/or tonight. 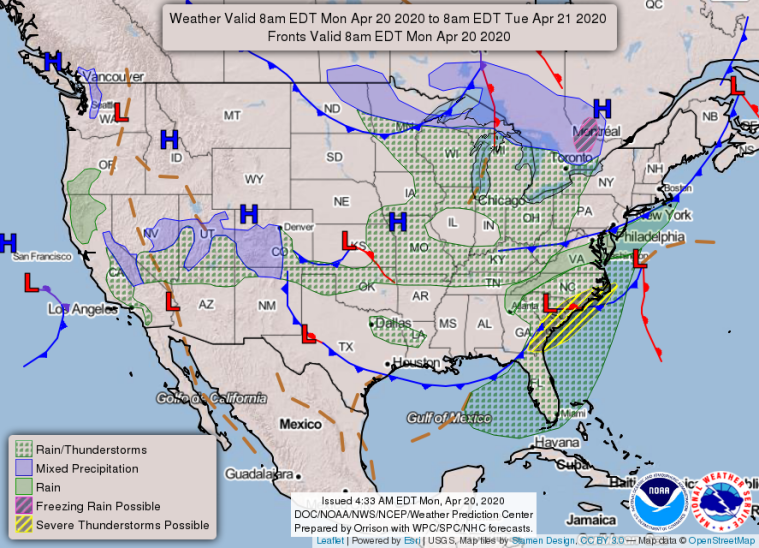 (Answer at the bottom of the blog!)

According to NASA, “NASA astronauts Jessica Meir and Andrew Morgan returned to Earth Friday, along with Soyuz Commander Oleg Skripochka of the Russian space agency Roscosmos.

The trio departed the International Space Station at 9:53 p.m. EDT Thursday and made a safe, parachute-assisted landing at 1:16 a.m. Friday in Kazakhstan (11:16 a.m. local time), southeast of the remote town of Dzhezkazgan. During their first spaceflight, Morgan and Meir contributed to hundreds of experiments in biology, Earth science, human research, physical sciences and technology development.

Morgan’s nine-month mission began July 20, 2019. His 272-day flight spanned Expeditions 60-62, encompassing a total of 4,352 Earth orbits and a journey of 115.3 million miles. Morgan’s extended stay in space will increase knowledge about how the human body responds to longer-duration spaceflight, through the various investigations he supported, including the Fluid Shifts study. He also conducted seven spacewalks – totaling 45 hours and 48 minutes – four of which were to improve and extend the life of the station’s Alpha Magnetic Spectrometer as it looks for evidence of dark matter in the universe.

Meir and Skripochka, who launched on the Soyuz MS-15 spacecraft Sept. 25, 2019, spent 205 days in space, making 3,280 orbits of Earth during a trip of 86.9 million miles. During her first spaceflight, Meir conducted the first three all-woman spacewalks with crewmate Christina Koch of NASA, totaling 21 hours and 44 minutes. Among the investigations to which she contributed is a study co-led by a former colleague of hers, examining how human heart tissue functions in space. Skripochka is completing his third spaceflight for a cumulative 536 days in orbit.

After post-landing medical checks, the crew will return by Russian helicopters to the recovery staging city in Baikonur, Kazakhstan, where they will split up. Morgan and Meir will board a NASA plane located in the adjacent city of Kyzlorda, Kazakhstan, for a flight back to Houston. Skripochka will board a Gagarin Cosmonaut Training Center aircraft in Baikonur to return to his home in Star City, Russia.

Among the research experiments to which the Expedition 62 crew contributed was the Droplet Formation Study, which evaluates water droplet formation, water flow and, indirectly, the perceived pressure of current shower head technology as compared to the industry-standard use of jet nozzles. The study examines droplet size and speed and how they affect the feeling of increased pressure for the end user. Another experiment to which the crew contributed was Mochii, a miniature scanning electron microscope used to conduct real-time, on-site imaging and composition measurements of particles. Analysis of small and microscopic particles is a critical need for human space exploration beyond low-Earth orbit when samples cannot be returned to Earth immediately for analysis.

The crew members of Expedition 63 are scheduled to be aboard the station to welcome NASA astronauts Robert Behnken and Douglas Hurley, the first astronauts to launch from American soil to the space station since 2011, on NASA’s upcoming SpaceX Demo-2 flight test.” 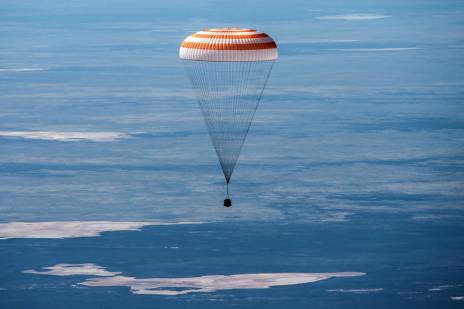 The period of April 25-29 is now favoring more below-normal temperatures and continued above-normal rainfall for our area. Normal highs this time of year are around the upper 60s and lows in the mid 40s.

Pictured below are two different views. One of the view of Earth from the Moon and the other is the view of the Moon from the Earth. Pretty cool views, right?

The main severe weather threat across the South yesterday turned out to be flooding. There were tornadoes, and at least one significant one, but this event was nothing compared to last Sunday’s.

A: (d) A supercell thunderstorm is one that exhibits strong rotation and the presence of a mesocylone. This could lead to a tornado. A mesocylone is the rotating, lowering base of a cloud at the rear of the storm. 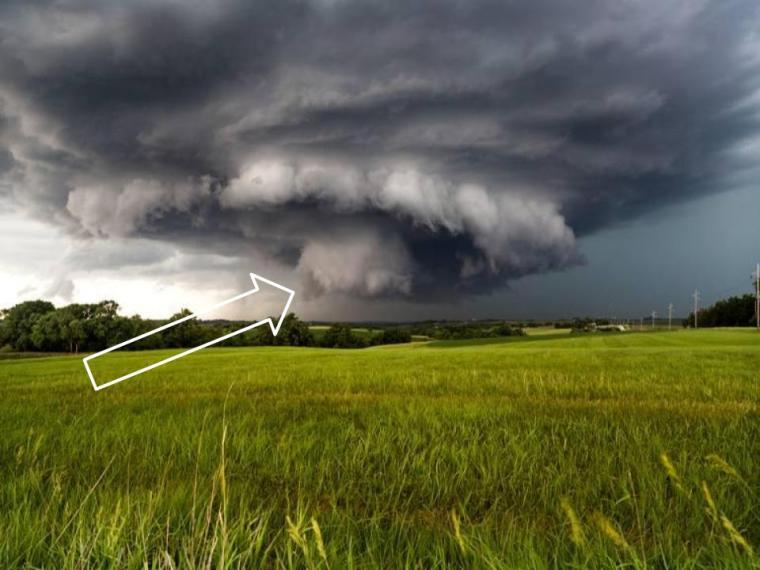