Any storm that develops, especially in the afternoons and evenings, is capable of becoming severe, with a damaging wind gust being the primary threat. As always, be mindful of that deadly cloud-to-ground lightning and localized flash flooding from sudden, torrential downpours of rain. Please be mindful of this if you’re out on area lakes or campgrounds today and/or this week.

Due to the very isolated threat of any severe wind gusts, my concern level is low.

Memorial Day: Scattered showers and storms, mainly in the afternoon/evening.

Tuesday: Scattered showers and storms, mainly in the afternoon/evening.

Wednesday – Thursday: Widely scattered showers and storms, mainly in the afternoon and evening.

Friday – Saturday: Showers and storms likely, as a cold front slowly moves through the area.

Heavy rainfall will threaten the southern plains and southern Florida. Severe storms will accompany that rainfall in western and southern Texas. 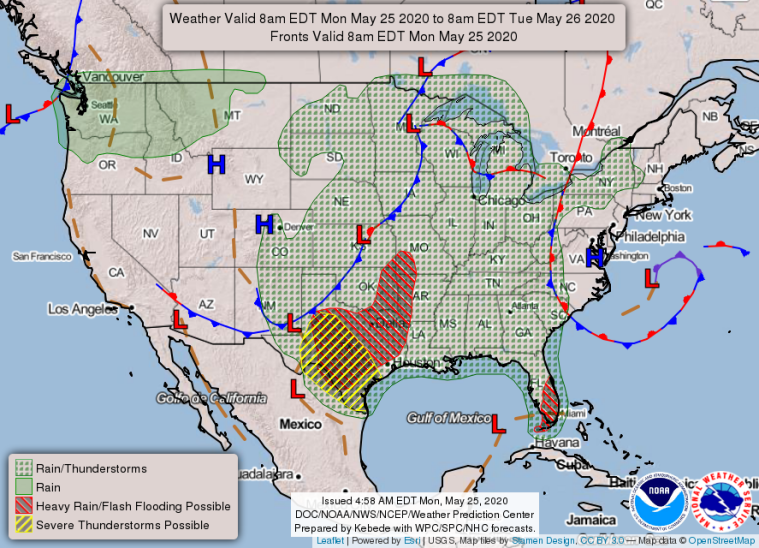 No widespread hazardous weather is expected at this time.

This is the first “hay cutting weather” forecast that I made at the request of the Tennessee Association of Conservation. I’ll have another update to this on Wednesday, followed by a complete update by Sunday.

On this day in 1973 the first crew to occupy Skylab launched from Kennedy Space Center. The three-man crew spent 28 days on Skylab, breaking the record for longest time for humans spent in space. Skylab was the first US space station.

The previous record for time spent in space had been set by the Russians on the world’s first space station, the Soyuz in 1971. After 22 days the crew undocked and then disastrously lost their lives when their crew capsule depressurized during reentry, killing the three cosmonauts (Russians astronauts are called cosmonauts). They are the only humans known to have died in space.

The United States’ Skylab space station operated from 1973 to 1979 and was a predecessor to the current day International Space Station, where our crew on Wednesday will be heading!

Pictured below is Skylab. The space station gradually lost altitude and much of it burned up falling through Earth’s atmosphere. Then, more funding and support was funneled into the space shuttle program that would begin in just a couple of years. 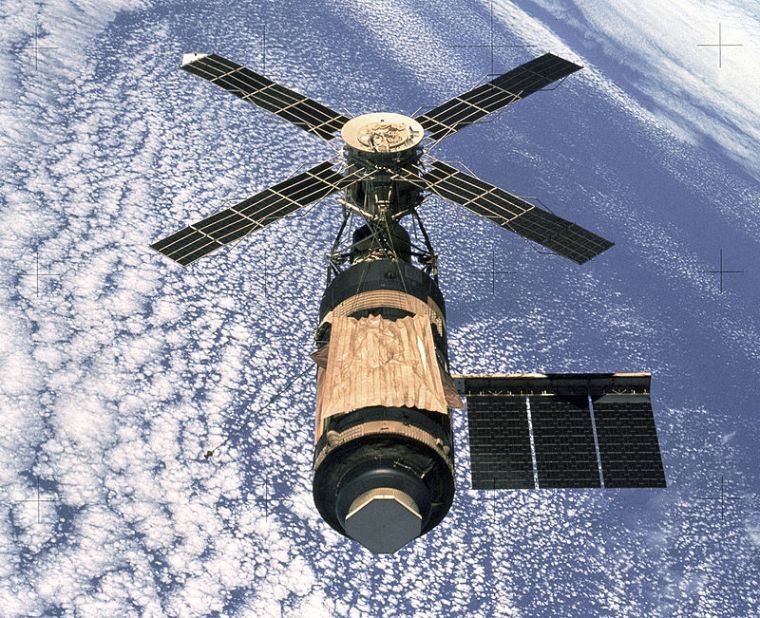 Q: What is the number one reason for rocket launch delays?

(Answer at the end of the blog!)

Long range indications for the last days of May and first few days of June show normal to above normal temps and average to slightly above average rainfall.

The heaviest rainfall this week will be over the southern plains/Lower Mississippi River Valley and across the Southeast Coast and southern Appalachians.

It was as it sounds….a shuttle into space. It was almost like a big bus that could carry you far from our beautiful planet. What a view it offered from way up there! The seven-passenger craft would carry astronauts to space, where they would do such things as release satellites, carry out experiments, takes lots of pictures, and so on. It was quite the vessel for a great many scientific activities!

The shuttle would leave Earth like a rocket, but return to Earth by gliding. That’s right, it became a giant glider, sort of like a giant, heavy paper airplane, only the shuttles aim and angling was much more precise! (ha)

The space shuttle program began with its first flight in April of 1981 and would end with a final flight in July 2011. In all, there were 135 shuttle missions! The missions would last one to two weeks. Of those, two missions ended in the loss of the shuttle and crew. The first was the Challenger, which suffered catastrophic failure 73 seconds into flight. The second was Columbia, which was lost upon re-entry into Earth’s atmosphere.

For many of us, the fact that we only lost two (which is certainly too many) is a bit of a wonder. Considering the dangers with those missions, coupled with the flaws of the shuttles, it is quite impressive that only two shuttles were lost of the 135 missions. Don’t get me wrong, it was an impressive craft, but it was certainly not flawless.

One of the great thing about shuttles is that they were re-usable. Once a mission was complete, the craft would be inspected and repaired and was then ready for fly again. This made the program economically friendly to the US government…for the most part.

The shuttle consisted of the orbiter (which housed the astronauts), an external fuel tank (that big red tank on the shuttle’s belly) and two side rocket boosters. The external fuel tank was the only part of the craft that was not reusable. Those boosters would burn up the fuel they had within them in the first two minutes after launch. They would then fall back to earth and land in the oceans. They were re-usable once they were recovered, though that recovery was quite challenging! Their purpose was to provide the extra lift needed to overcome gravity (gravity decreases with height). Today’s boosters are much easier to recover, since they can now land on platforms at sea.

Like I mentioned before, space shuttles were not flawless and they were lacking a component that Wednesday’s mission has. What’s that, you ask? I’ll tell you all about it in a special Launch Week post Tuesday night! 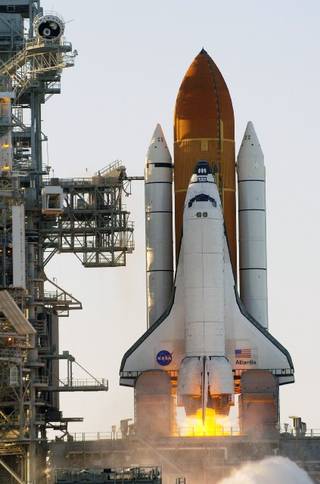 DEMO-2 is on the launch pad! I’ve stood on that pad and, believe me, it’s huge! (ha) It’s also a very inspiring place to stand. You find yourself doing a lot of pondering on that pad. It truly is a special place. I’ll have much more on this in your 3:33 pm update today! Stay tuned for some really cool stuff!

I have a tentative blog schedule for Launch Week. It is as follows:

Tuesday Morning Blog: About the astronauts on DEMO-2

Wednesday at 3:33: THE LAUNCH! (If launch is postponed, everything from here down will change but I have some cool ideas for a backup plan! ha)

Wednesday Night: Update on the mission

Thursday Morning Blog: To the Moon! (all about the Moon missions coming up)

A: (c) The number one reason for delays is the weather. They absolutely cannot launch if conditions for launching rockets is compromised by weather. A few clouds are alright, but if there are enough clouds to possibly generate a lightning strike the launch is scrubbed.