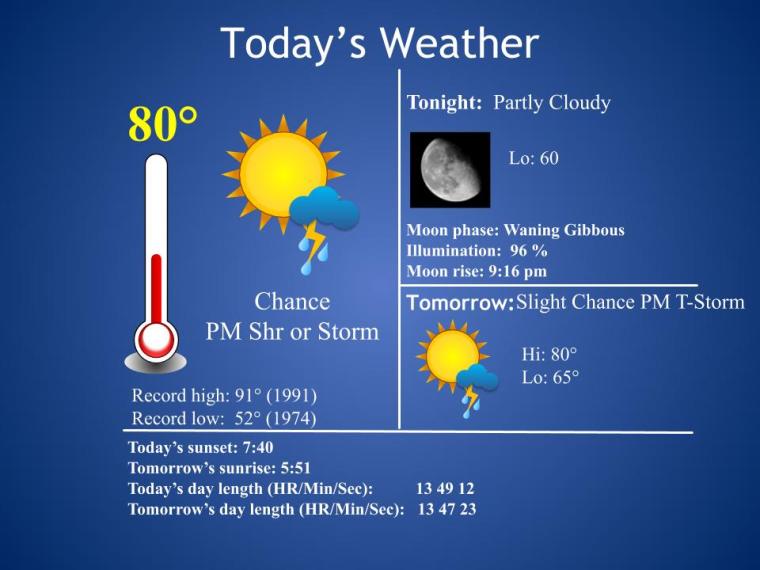 Widespread hazardous weather is not expected over the next seven days.

Today & Tomorrow: Partly cloudy skies, with a chance for an afternoon/evening shower or storm.

Friday & Saturday: Partly cloudy, with just a slight chance for a shower or storm, mainly in the afternoon/evening.

Sunday – Tuesday: Warmer and more humid, with a bit better chance for a mainly afternoon/evening shower or storm.

With only slim rain chances each day, I’ve made each day a good hay day. Of course, we’ll always dodge a storm or two in the afternoons/evenings, but most of us will stay dry each day. Extended outlooks show a warmer and wetter pattern developing. I’ll keep you posted.

We just have one area of concern out in the Atlantic and it is looking less and less likely to become anything. You’ll also note the remnants of Isaias moving well into Canada now.

The only area of concern is across northeastern Colorado and southwestern Nebraska, where a wind and hail threat exist from storms today. The remnants of Isaias have moved into Canada.

Widespread hazardous weather is not expected on Thursday.

On this day in 1843 a spectacular cloudburst near Philadelphia turned the small creeks and streams entering the Delaware River into raging torrents. As much as sixteen inches of rain fell in just three hours! Flooding destroyed thirty-two county bridges and caused nineteen deaths. It is believed that several small tornadoes accompanied the torrential rains, one of which upset and sank more than thirty barges on the Schuylkill River.

As we approach the middle of August, the trend looks to turn warmer and wetter.

This is satellite imagery of storms yesterday evening across northern Colorado. This is two hours of time-lapsed satellite imagery. Warnings are overlaid on the satellite, as well as the 2″ diameter hail reports. Video from Bill Line (@bill_line).

Last week, teams confirmed that things are on schedule to begin assembling the robotic explorer that will venture to the Trojan asteroids and revolutionize our knowledge of how the solar system formed. The mission is called Lucy and should launch in October 2021. Lockheed Martin Space Systems in Denver is building the spacecraft.

“Lucy will be the first space mission to study the Trojan asteroids, a population of small bodies orbiting the Sun “leading” and “trailing” Jupiter, at the same distance from the Sun as the gas giant. With flyby encounters past eight different asteroids – one in the Main Asteroid Belt and seven in the Trojan swarms, Lucy will be the first space mission in history to explore so many different destinations in independent orbits around our Sun.”