No widespread severe is expected over the next seven days.

We are entering a very summer-like pattern. We’ll see hot and humid days, with the chance for an isolated afternoon/evening shower or storm. The chance for showers and storms increases Sunday night, but those storms should stay below severe limits. Just look for some soaking rain and a rumble of thunder. That activity moves out early Monday morning.

The summer-like pattern holds on into next week, with more hot and humid days and warm and humid nights. Maybe summer has come early for the plateau?

Looking ahead, I think it’s now safe to say that the danger of frost has ended for this season for the plateau. I’ve heard that some of you had some frost this past Tuesday morning. That will be the last frost of the spring of 2019.

We’re not used to heat like we’ll have this weekend, so the NWS Nashville sent out some info to remind us to stay safe.

The U.S. has been impacted by only four category 5 hurricanes (since records have been kept). All four were tropical storms just three days prior to making landfall. That’s an incredible statistic. The amount of intensification required to go from a tropical storm to the most powerful storm earth can offer is just astounding.

On this date in 1874 dam slippage west of Northhampton, Massachusetts led to the Mill Creek Disaster. The dam’s failure led to a flash flood that killed 143 people and caused a million dollars in property damage. That’s a lot of money today but it was a LOT of money in 1874.

On this date in 1924 a very unseasonably warm airmass led to a high of 108 degrees in Blitzen, Oregon! This set a record for the state for the month of May. The record was tied on May 31st, 1986 and still stands today.

What to look for in the night sky tonight

An hour after sundown, you can spot Mars at about 20 degrees above the west-northwest horizon. It’s rather faint but you can spot the Red Planet if you look good enough. Mars doesn’t set until about 11:00 p.m. Look near Regulus, in the constellation Leo the Lion, and you’ll find Mars. With just your eyes Regulus appears as one star, but through binoculars you’ll see that it’s actually two.

Below is a chart of the sky to help you out. Mars is circled. 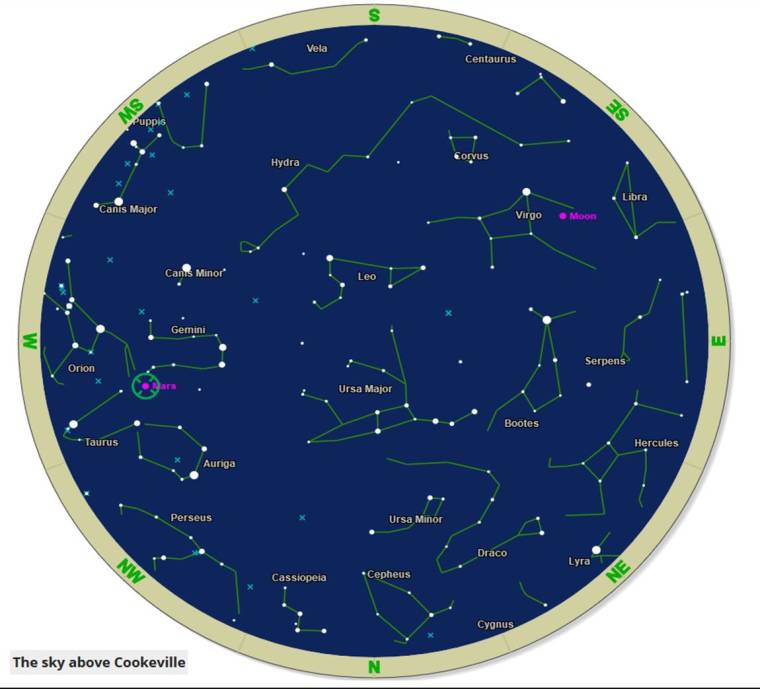 I started to send out a message through the blog last night but the clouds covered up Jupiter just as I was about to. Let me tell ya, if you go out after 9:45 p.m. or so and look toward the east, southeast, and just a few degrees above the horizon, you can’t miss Jupiter! It is, by far, the brightest thing in the sky at that time. Go out and have a look! If I think of it and the skies are clear, I’ll send out a message for you all when I see it again.

A multi-day period of severe weather begins today across the plains. Chasers are headed that direction by the masses. I always worry that someday they’ll find themselves too close to a storm and not be able to get out of its way because of traffic. I found myself in that situation once in Oklahoma and I did not like that at all. We just had to let the circulation go over us and hope and pray it didn’t produce a tornado. That’s not good.

Hopefully, all the chasers will stay safe and hopefully the storms won’t be too bad. Still, it’s unusual to see such an extended period of severe weather in the forecast, even for the plains.