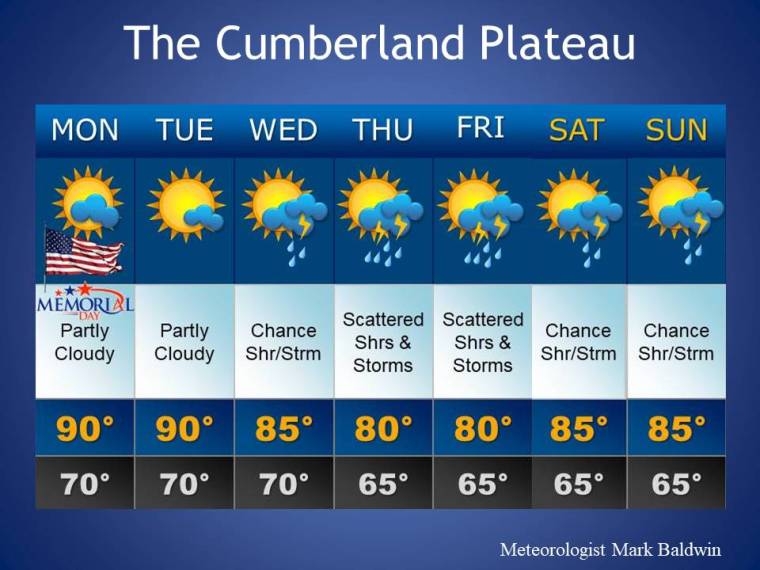 No widespread hazardous weather in sight.

It looks like two more hot and dry days ahead before we’ll finally start talking about some rain and storm chances, though some of us may stay dry through the extended period.

Be safe in that afternoon heat. These are our first truly hot days of summer and some of us may not be quite ready for such heat. As far as rain chances go, we can never completely rule out a stray shower or storm during hot days like these, but about 95% will find no such relief. By Wednesday, however, our ridge of high pressure begins to break down and I think we’ll see a couple of storms on the plateau by the afternoon.

A better storm system, though still not overly impressive, will bring us better rain chances by later Thursday and early Friday. Still, only about 50-60% of us will get rain from that (as it looks right now).  That means that about half of us may stay dry even through this better rain chance.

The pattern looks to remain a bit unsettled on into Friday and the weekend, bringing a few more storms, mainly during the afternoons/evenings. That rain coverage should be about 30%.

The difference between hail and sleet is quite substantial. Hail is formed in thunderstorms. Updrafts carry the stones high into the cold atmosphere and then drop them to the ground when the updraft can no longer support their weight.

Crossville picked up 6.29 inches of rain. This is the greatest one-day rainfall total on record. We may be wishing for this kind of rainfall soon!

On this day in 1896, a massive tornado struck St. Louis, Missouri. The twister killed 306 people and caused millions of dollars in damages. This was the most destructive tornado on record for the U.S. at this time. At one point, the tornado pierced a 5/8″ thick iron sheet with a 2×4 inch plank!

What to look for in the night sky tonight

For the first time this year, you can glimpse Saturn in the evening sky. The ringed planet rises around 11:30 p.m. this week and climbs highest in the south as morning twilight starts to break. Use a telescope to see the planet’s 18″-diameter disk and stunning ring system!

I’ll be making some changes to the blog real soon. I think it would be best if you get the Astronomy portion of the blog sent out to you later in the day, maybe toward the evening. That would also give me a chance to give you a quick weather update for that night, as well. I feel like people forget what they could have looked for in the night sky between reading the morning blog and nightfall. So, look for that change to come soon!

You all have a wonderful Memorial Day.

“There is nothing nobler than risking your life for your country.”

Pictured below is my Grandpa Nolan Lowe’s flag (WWII)  that was draped upon his casket on July 14, 1992. I am so honored to have been given this and I will treasure it for all of my life.