—A slight chance for a shower tomorrow, followed by cooler, drier weather.

TODAY: Showers and storms will produce heavy rainfall at times, leading to the possibility of flash flooding. Never drive across flooded roadways.

We’ll see mostly cloudy skies and a nearly 100% chance of rain. Some of that rainfall will be heavy, leading to flash flooding. Please be careful if you must be out and about during any heavy rainfall. This could lead to flooding of roadways. Remember to never drive across a flooded road.

This cold front will still be close enough to us tomorrow that we could see an isolated shower. After that, the rest of the week is looking superb! I hope you like cooler temperatures and low humidity, because that’s just what’s headed our way!

Enjoy this! We still have a LOT of summer left and I can guarantee you that August will have some more hot and humid weather is store for us.

Hurricanes go through cycles, where the current eye of the storm is replaced by a new eye. This is called an eyewall replacement cycle. During this cycle, the hurricane weakens. After the cycle is complete and the new eye has formed, the hurricane restrengthens, sometimes to a greater power than it was before the eyewall replacement cycle commenced. It’s not out of the question that in the middle of this cycle the hurricane has two eyes, but that only lasts for a short period of time.

On this day in 1995 folks were attending an outdoor carnival in Murfreesboro, TN. A storm approached and produced a lightning strike that hit a powerpole near the carnival. Six people were injured. Another strike hit a nearby tree, completely destroying the tree.

Sheep in the Wasatch National Forest of Utah were not so lucky with their lightning strike on this day in 1918. The bolt of lightning hit a herd of 504 sheep, killing them instantly. The sheep were herding together and the strike simply passed from one sheep to the next. That was a baaaaaad day for them sheep. :O

It was a cool day! The high was only 75, after a warm morning low of 65. A quarter of an inch of rain fell.

The National Hurricane Center is monitoring an area of disturbed weather in the Bahamas. This system has a chance for developing into a tropical system this week, as it moves west, northwest at 15 mph. It looks like the system would affect the east coast of Florida, before heading out to sea. Our cold front today should help kick it out into the Atlantic. Regardless of development, the system is expected to bring tropical downpours to the Sunshine State as we go through the week.

Below is a satellite image of the system this morning, located over the Bahamas. As you can see, it certainly lacks any organization this morning.

As you can see from the graphic below, the National Hurricane Center expects the system to turn to the north. Sometimes, these systems “miss” the cold front and slip to its south. That puts them moving into the Gulf. It looked like that might happen with yesterday’s data but today’s data has it moving north again. I’ll keep an eye on it! 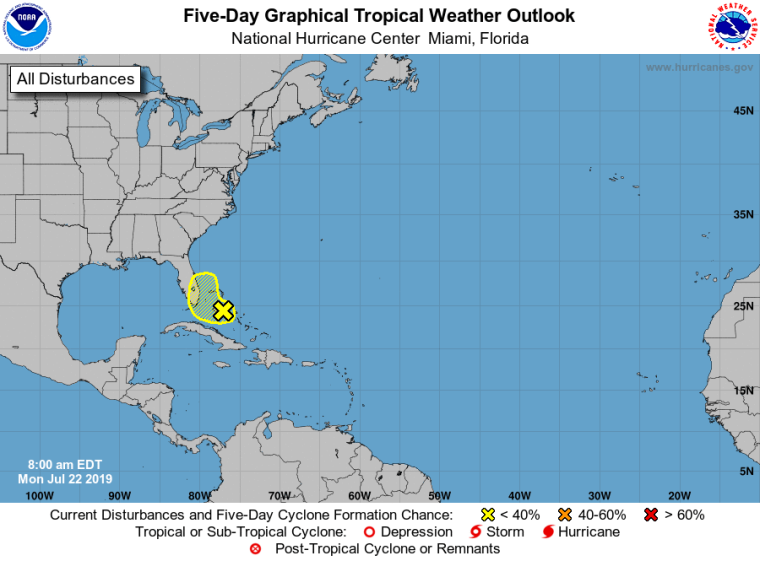 You all have a great day and watch out for them downpours!