Don’t forget to “Follow” the blog to get updates emailed to you! Just find the “Follow” button in the lower right corner of our screen. Find out why so many others are already following. Thank you so much!

Our next system arrives Saturday night and Sunday

Frost is likely by Thursday morning. Keep this in mind if you have tender plants sprouting and budding.

We’ll see a rainy day today, with rainfall totals of around one-half to three quarters of an inch. No flooding problems are anticipated.

Skies will clear out tomorrow, and it shouldn’t be half bad. It will be on the cool side but we should see some sun and that always helps out.

Thursday and Friday look dry and mostly sunny. I think we may even get in a nice Saturday, though there will be more clouds trying to move in and a shower or two across the region. Those clouds are ahead of our next system that will be moving in by the end of the weekend. Don’t worry too much about Sunday, though, as it looks like isolated activity at this point. I’ll fine tune that weekend forecast as we get closer. 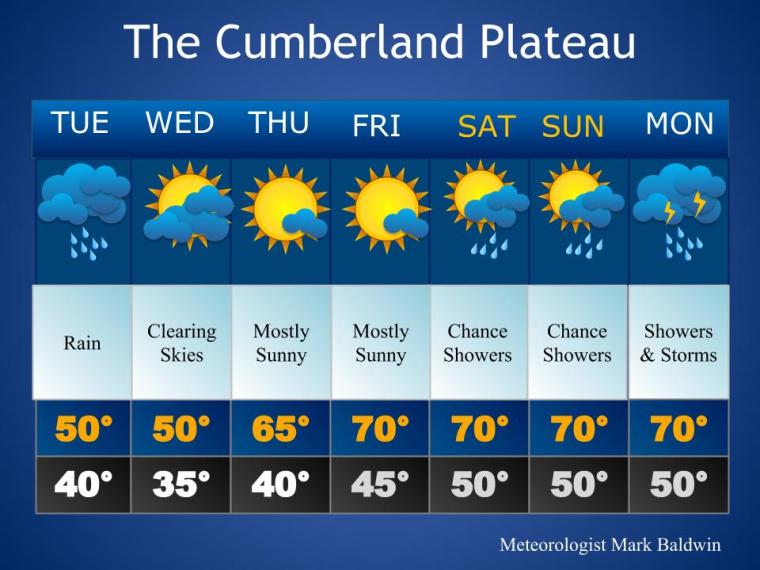 Severe storms threaten the Deep South today, from southern Alabama through southern Georgia. Tornado watches are in place this morning. A cold rain overspreads the Midsouth, from northern Arkansas, across TN to the Virginias. Temps are cold enough for mountain snow in West Virginia today and tonight. More wintry weather threatens the Pacific Northwest and northern plains today.

The worst snowstorm on record struck St. Louis, Missouri on this day in 1890. Twenty inches of snow fell in just 24 hours.

The worst tornado disaster in Florida history struck that state on this day in 1962. Milton, Florida lost 17 people, with another 100 being injured.

The costliest tornado in Georgia’s history struck the northern part of that state on this day in 1973. The tornado cut a nearly continuous path of destruction for 75 miles. The total damages topped 113 million dollars.

Tennessee is no stranger to tornadoes. The map below shows tornadoes by county since 1950. The map ends at 2018, so we already know numbers have risen for some of these counties because of this year’s tornadoes. There is some population bias, as there is with most any tornado study. It’s not that tornadoes especially love populated areas, it’s just that they are much more likely to be reported there. Still, there are areas in the state that are certainly harder hit than others. For instance, our southern Middle TN counties are very rural, yet look at those numbers.

Don’t forget that NASA has some cool home educational things you can do with the kids! Check those out by following the link! You may have to play around with it all for a while to figure out how it all works. Once you do, it looks really cool!

Many of you saw where the NWS has concluded that Cumberland County did not have a tornado Saturday night. I agree 100%. Using radar and site surveying information, there is no evidence of converging winds that are necessary to prove a tornado occurred. I saw LOTS of trees down. With our saturated soils, we’re going to see trees come down anytime we have wind this spring.

I hope this also reiterates how serious severe t-storms can be. Storms have been documented to produce straight-line winds well over 100 mph. Our storms produced gust to at least 95 mph. Whether that wind is coming straight at you, or spinning round and round, it’s going to cause a lot of damage, especially to trees in saturated soils.

For perspective, the Rinnie tornado earlier this month produced less damage in our community than the straight-line winds did around town and Pleasant Hill Saturday night. Our tornado had 85 mph winds and a narrow path, while damaging straight-line winds Saturday night covered a wide swath and, at times, topped 95 mph. The only difference is that our damage converged to a point and Saturday night’s damage did not. Please take severe t-storm warnings seriously, folks.

Pictured below is the radar loop form Saturday night, with watches and warnings added.