TODAY: Some storms this afternoon and evening could become strong, with some hail and gusty winds. No widespread severe weather is expected. 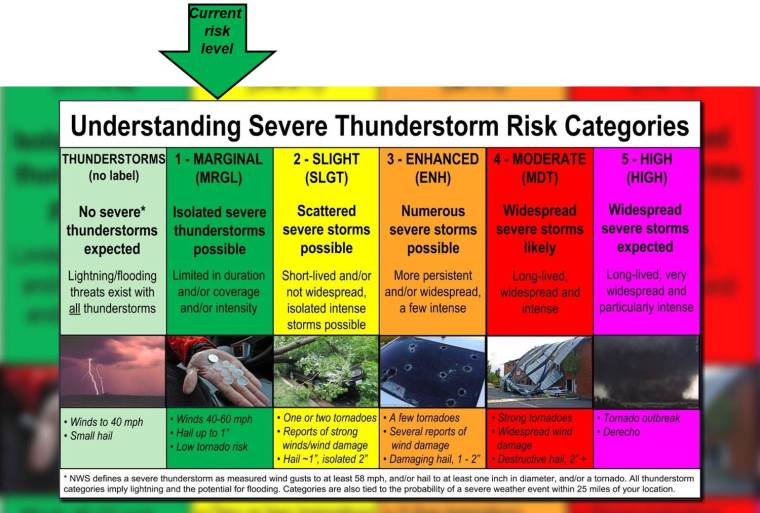 Look for showers and isolated t-storms to be with us through the day. The disturbance coming over us this evening is quite vigorous. However, these morning clouds and isolated showers may keep us cool and stable enough to avoid any trouble with stronger storms. Never the less, the Storm Prediction Center has placed us in the marginal risk for severe storms, as you can see on the diagram above. They had considered an upgrade to slight risk but they have decided against that for now. The next update from them comes at 11:30, but I’m not sure we will see any changes to the convective outlook.

This system will clear the way for more cool weather for us for Thursday and Friday. Those afternoons will be pleasant and the overnight lows crisp.

It gets warmer for Saturday but now models are trending drier again. I think that trend will hold.

On Father’s Day, things begin to get a bit more unsettled. I’m not sure I would cancel any outdoor plans, but have an indoor back-up plan just in case. Many of us may not see rain during the day. The latest data suggest the bulk of the rain chance may hold off until dark.

The pattern looks wetter and more unsettled for the start of our work week (and possibly for the better part of the week).

Did you know earth isn’t the only place in our solar system that experiences rain? Titan, Saturn’s largest moon, actually has an atmosphere similar to ours, made up mostly of nitrogen. Titan also has seasons and clouds that produce precipitation. Unfortunately for humans, that precip is in the form of methane. So, rather than cycling through a water cycle, Titan cycles methane, with clouds dropping that precip into the moon’s lakes, rivers, and seas. Methane, as you probably already know, is the main constituent of natural gas.

It didn’t feel like summer in Wyoming on this day in 1947! An unusual, late-season snowstorm dropped 4-18 inches of snow across southern and central portions of the state. This is the latest and heaviest and latest snow on record for many of these places.

In 1969 it was Montana’s turn to experience late-season snowfall. Five inches of snow coated the cities of Broadus and Great Falls.

It was a nice day! The high was 82 and the low was 69. No rain fell. The average wind speed was 13 mph from the South Southwest.

In an article published yesterday, SpaceX described the coming Falcon Heavy launch as one the most challenging launches in the company’s history. Several one-of-a-kind NASA technology and science payloads will be aboard. One of those technologies is a deep space atomic clock that will aid in deep space exploration. Right now, signals have to be sent to earth in order for spacecraft to get it’s GPS coordinates, speed, etc. After this mission, a deep space clock will be in space and that will save an enormous amount of time for information that astronauts would otherwise be waiting for. For instance, astronauts traveling to Mars might have to wait 40 minutes to get their GPS coordinates from an atomic clock on earth. Can you imagine waiting 40 minutes for your GPS to tell you where to turn? Now, that wait will be cut at least in half (probably more!).  Time is everything in space and having a good atomic clock out there will be priceless to future explorers!