A lot of new data has come within the past hour. First of all, the Storm Prediction Center (SPC) has dramatically raised the tornado threat for southern Middle TN. These are storms we will have to watch very closely as they move east and northeast this evening. The warm front will be in that vicinity when the cold front arrives. That collision will give way to rotating t-storms, some of which could produce strong tornadoes. Again, that threat is highest in that orange shaded region you see across southern Middle TN. 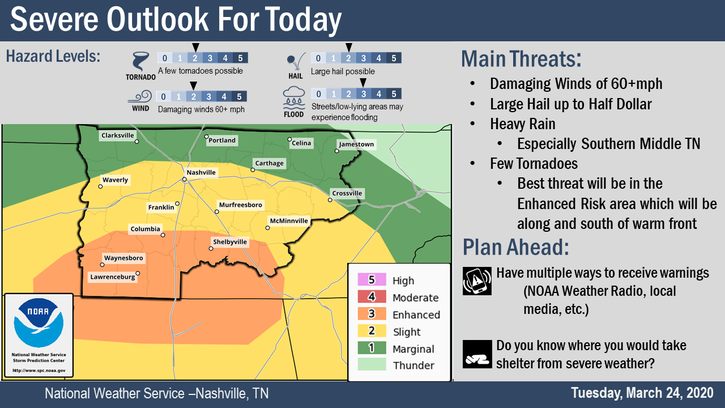 The thought is that the rain-cooled air to the north, across much of Middle TN, will combine with warm and humid air coming up from the south. Along that boundary, across southern Middle Tn, severe storms could flourish. This is very similar to what happened the night of the Cookeville tornado. The biggest difference today is that the boundary is looking to set up across southern Middle TN and not along I-40 and northern Cumberland County like it did that night.

Even on that night, there were a couple of tornadoes north of that boundary in Kentucky. This may be a similar situation, where those of us in the lesser tornado threat still see one or two weaker tornadoes.

For this and other reasons, the SPC has now included most of Cumberland and Putnam Counties in the slight risk, per the 11:30 update. That threat area has expanded since the last update. Those of you in Fentress and Overton Counties are in the marginal risk. The chance for tornadoes is very low north of Cumberland and Putnam Counties. Even here on the rain-cooled side we could see large hail, damaging winds, and an isolated tornado or two.

The good news is that it’s looking like we will be on the rain-cooled side of things. Let’s just hope that sun doesn’t come out this afternoon. I’ve seen breaks in the clouds on satellite across Middle and West TN and that is beginning to concern me.

A special discussion was just issued by the Storm Prediction Center stating that a tornado watch may be needed for West TN by 2:00 or 3:00. Notice on the radar image below how West TN is in a break from the rain, while storms gather strength along the Mississippi River as they move east.

I’m keeping an eye on everything! If you know anyone who lives in southern Middle TN or northern Alabama, please make sure they understand how high the tornado threat is there this afternoon and evening.