Rain on the way 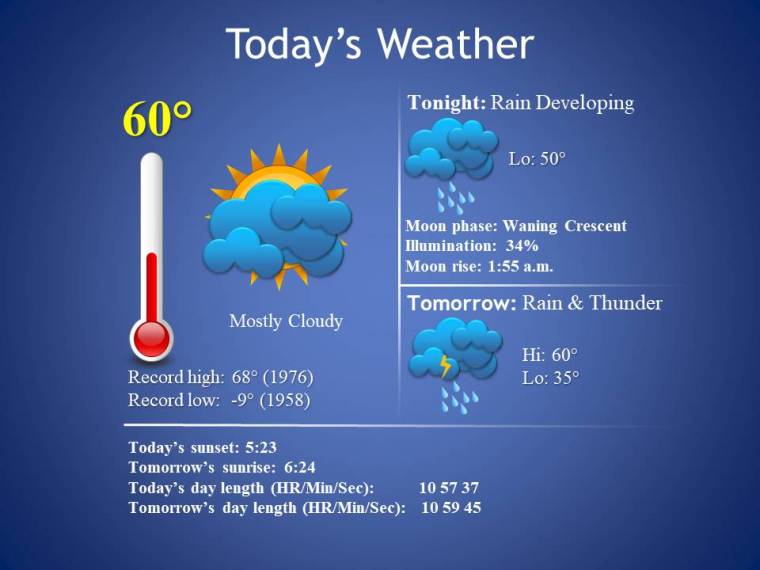 No significant threats are noted on the 7-day outlook. If, however, snow showers develop on Thursday we could be looking at some slick spots. At this time, that threat appears greatest south of I-40. Monitoring closely.

Well, many of us got to see some nice sunshine early this morning but clouds are already trying to move back in. Those clouds should continue to be on the gradual increase as we go through the day.

By tonight, those clouds will start to drop some rain. Thankfully, this rain event does not look like a heavy one. Total rainfall amounts across the plateau should stay around one half inch. That’s  a far cry from the 2-5+ inch amounts we’ve seen in weeks past!

The precip ends as some light showers Wednesday morning (perhaps even a snowflake?).

Then, a southern system develops and that could mean some light wintry precip for some of us on Thursday. That system will squirt just to our south, keeping us on the colder side of things. If any moisture makes it this far north, it would fall as snow flakes. That chance is greatest for those of you who live along and south of I-40. I’ll be watching this system closely in the coming days.

Friday and Saturday look good, before our next rain system begins moving in on Sunday. 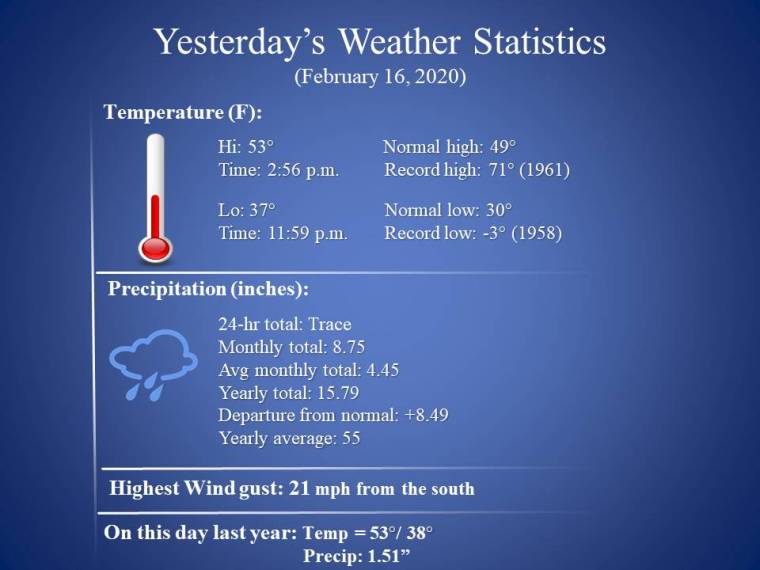 Flood advisories for numerous streams remain in effect across the Southeast. The green shading is for general thunderstorms today and/or tonight.

A strengthening storm system will spread accumulating snowfall across parts of the Upper Midwest this afternoon and tonight. Snowfall amounts of 2-5 inches are expected from southern Minnesota to Michigan. Meanwhile, folks out west continue to be affected by a winter storm.

It was mild enough for severe weather on this day in 1956. A powerful F-3 tornado struck Giles and Lawrence Counties in southern Middle Tennessee. Two people were hurt along the tornado’s 10-mile path of destruction.

Another tornado in that system touched down in Fentress County. The F-2 tornado injured two people as it moved along Highway 52, between Jamestown and Allardt.

The sun’s magnetic field has two poles, like a bar magnet. The poles flip every 11 years, during the peak of solar activity.

The launch of the resupply mission to the International Space Station (ISS) was a success on Saturday! The rocket launched from Wallop’s Island Virginia. The resupply spacecraft carried 7,500 pounds of science investigations and cargo to the ISS.

There are still a few spots left in my MASTER science class for kids this Thursday! The class meets at 4:30 at Roane State on Thursday. The topic is volcano weather. You must be registered and that form can be found here: https://docs.google.com/forms/d/e/1FAIpQLSfPgeoh5RqrXUpy4_8Yt9e-6E7WvUKUdtMD__TAq-MVtYHlKA/viewform