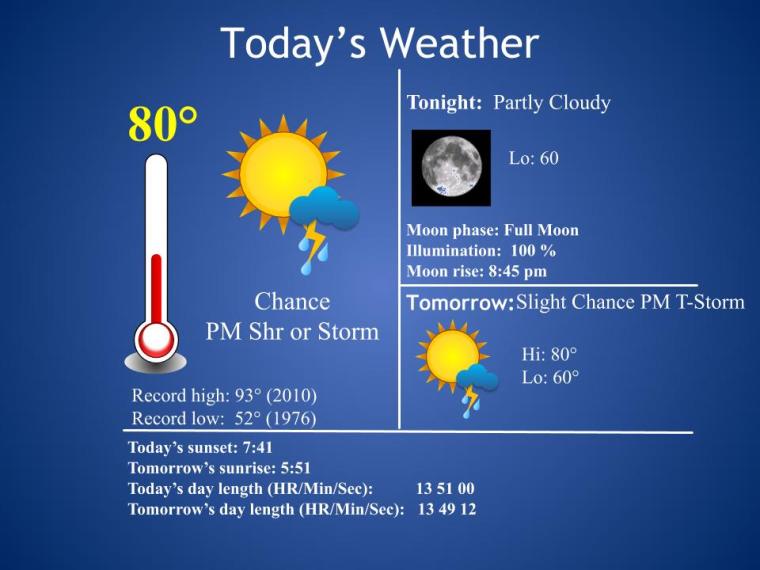 No widespread hazardous weather is expected over the next seven days. 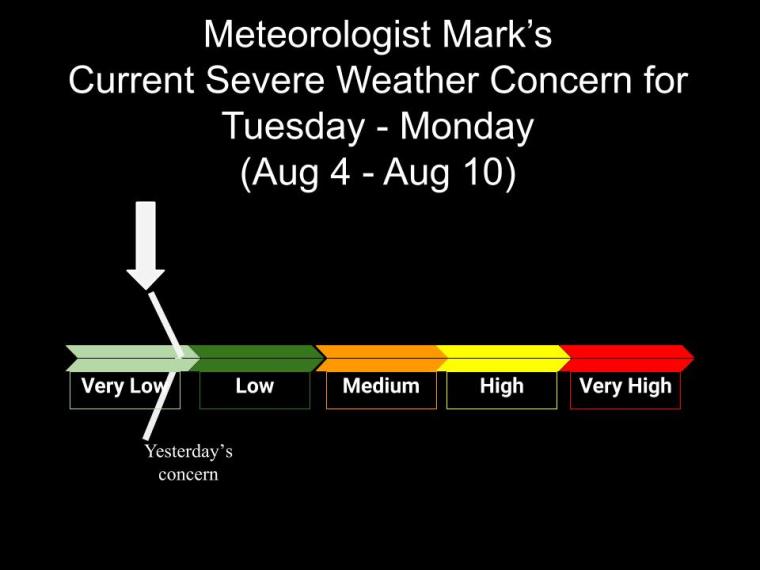 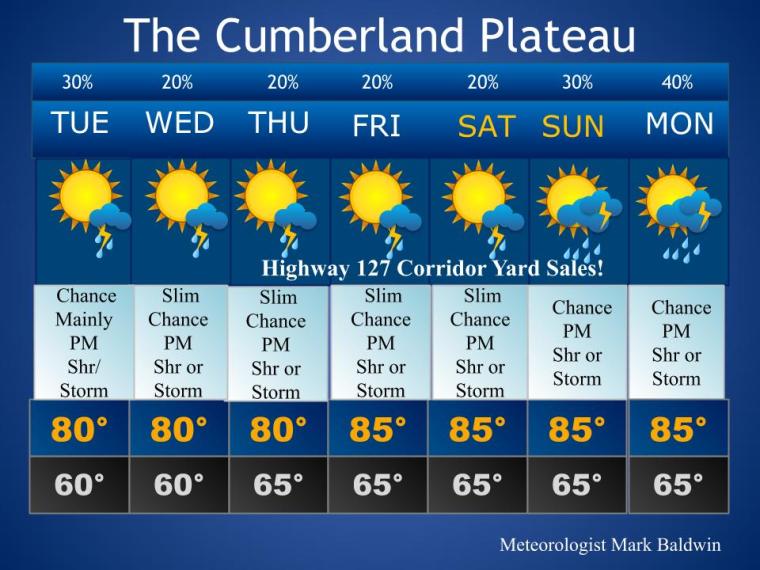 Today: Partly cloudy, with a chance for an afternoon/evening shower or storm.

Wednesday – Saturday: Partly cloudy, with a slim chance for an afternoon/evening shower or storm. Getting a bit warmer and more humid each day.

Sunday – Monday: Hot and humid, with a chance for showers and storms in the afternoon/evening.

That hay forecast is still looking good through Saturday! We can’t completely rule out a storm, especially in the heat-of-the-day hours, but those chances are rather slim. After Saturday, hot and humid weather will increase afternoon storm chances. 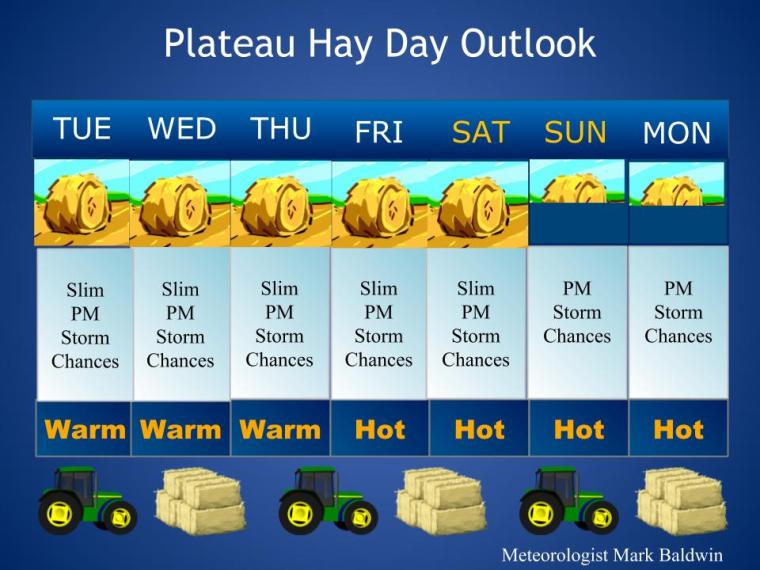 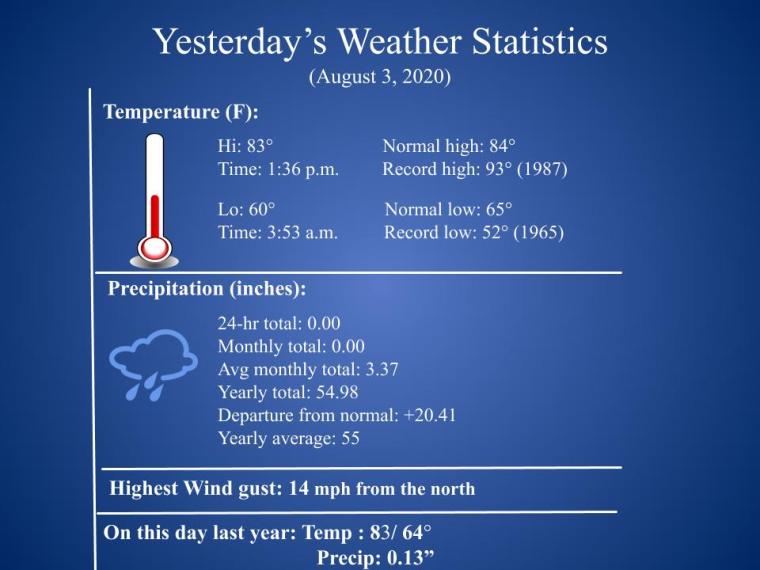 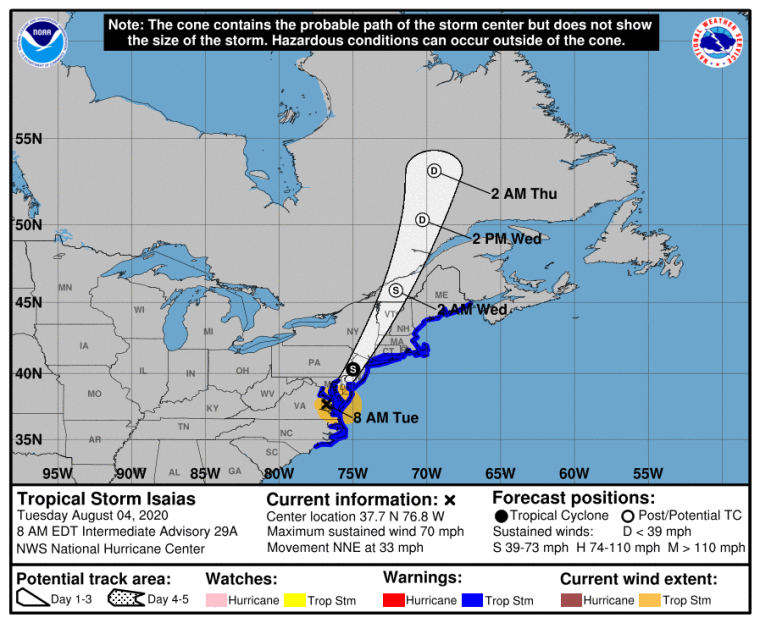 The other area of concern that looked to become Josephine is now looking weaker and more disorganized. The chances for this becoming our next named storm are now quite slim.

Isaias will bring severe storms and heavy rainfall to the Northeast today. Those folks are certainly in for a rough weather day. Farther west, severe storms will threaten western Nebraska, western Kansas, and the Panhandles of Texas and Oklahoma.

Some severe weather will threaten northeast Colorado and southwest Nebraska. Meanwhile, the remnants of Isaias will move into southern Canada.

At this time, a quieter day is expected. 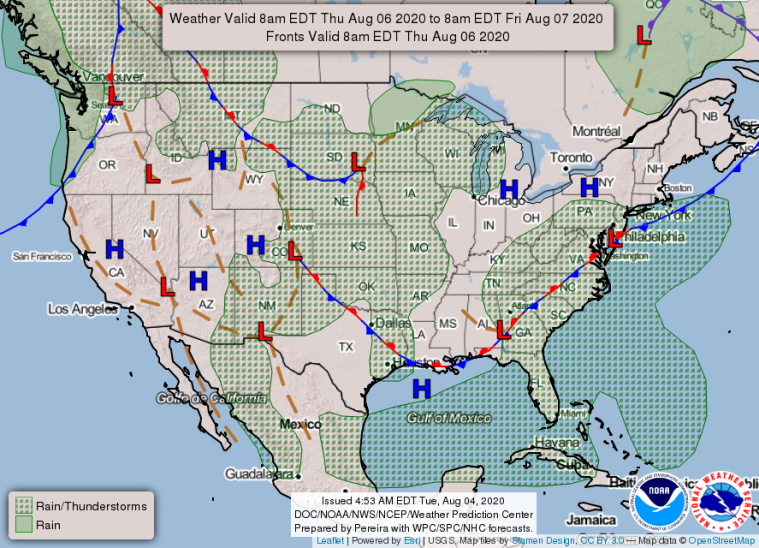 On this day in 1882 a vivid aurora (Northern Lights) was visible from Oregon to Maine, down the east coast as far as Mayport, Florida, and inland as far as Wellington, Kansas! That is quite the solar storm!

Observers at Louisville KY noted “merry dancers” across the sky, and observers at Saint Vincent, Minnesota noted it was probably the most brilliant aurora ever seen at that location.

It looks like long range indicators suggest typical August weather, with warm conditions and equal chances for being dry or wet for the 9th through the 13th. Nothing incredibly hot or cold, and nothing incredibly wet or dry.

This graphic shows the four quadrants of a hurricane and the frequency of tornado occurrence in 214 storms. It’s pretty clear that tornadoes prefer the right, front quadrant of the storm (relative to the storm’s motion). For instance, if a hurricane’s center is moving north and crossing Mobile, Alabama the highest chance for tornadoes would be found across the Florida Panhandle and southern Georgia. 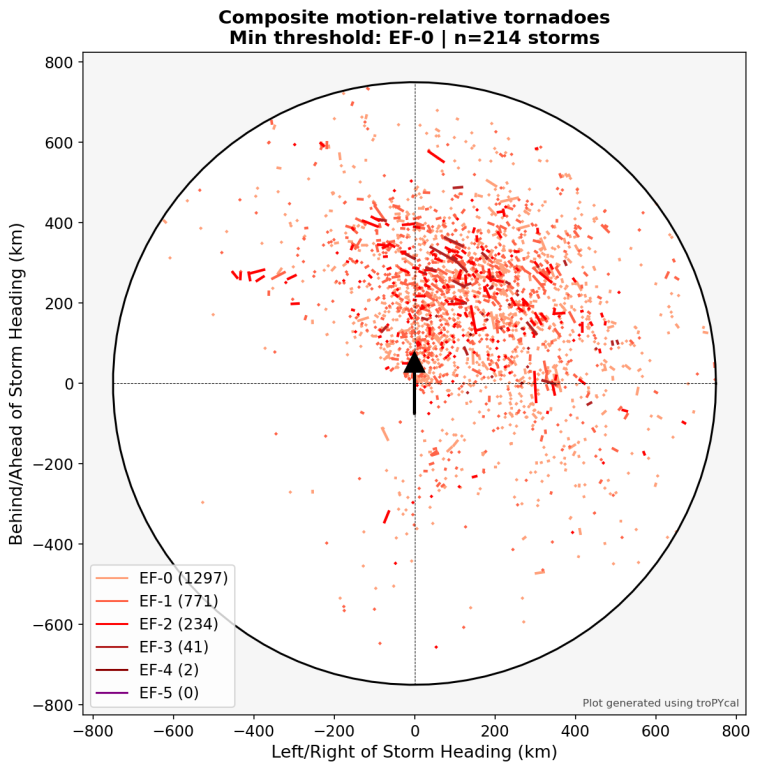 It has now been 16 years since Messenger launched from Kennedy Space Center. The spacecraft became the first to orbit Mercury. It found evidence of volcanic activity and water in the exosphere of Mercury. An exosphere is a planet’s outermost layer of atmosphere.

Hurricane Isaias made landfall at Ocean Isle Beach, North Carolina at 10:10 pm. Maximum sustained winds had increased to 85 mph. It’s going to be a long night for a lot of folks in the path of this storm. There have been numerous tornado warnings in the outer bands.

This is a look at current radar.

Storms to the east of the plateau are putting on quite the lightning show for us right now. Step out and look east and you can’t miss it. Also, the Full Moon is starting to light up those storm clouds. It’s quite the sight to see!

First of all, Tropical Storm Isaias is now Hurricane Isaias…again. Winds are barely at hurricane speeds (75 mph) but the storm has now formed an eye again. Isaias is expected to make landfall around midnight on the North/South Carolina border.

On a local note…

At 9:16 this evening the International Space Station will flyover! Just look to the northwest sky at that time. The ISS will then move toward the south. It will rise to 25 degrees up into the sky and be visible for two minutes. So, this isn’t the best view but I thought I’d go ahead and tell you, especially since you’ll already be out there looking at that gorgeous Full Moon….right?! (ha)

That Full Moon will rise at about 8:15 and should be an incredible sight to see this evening. Plus, the weather couldn’t be better outside, especially for August. That August Full Moon is often called the “Sturgeon Moon” (after the fish), “Red Moon”, “Green Corn Moon”, and “Grain Moon”. Whatever you call it, that big and bright moon will drench the night sky with light from sunset to sunrise, making this one of the brightest nights of the year.

We have some thunderstorms just east of the plateau this evening that the Full Moon will have to rise up and over before becoming visible. The process of that happening could be a sight to watch. Nothing like a few clouds to make for a beautiful night. You may even see some of those clouds flash with distant lightning.

You all have fun stargazing, looking for the ISS, and admiring that beautiful moon!